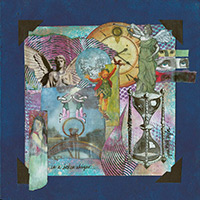 Big thank you to our talented friend Pam Woolway, a wonderful writer and poet. She allowed me to take one of her poems and see how I might translate it into lyrics for a song. A few of her wonderful visuals are sprinkled throughout the song and were definitely the impetus in it’s creation. I had no real idea of what this song was about until some time long after it was completed and Thayne was the one who pointed it out to me. I would prefer to let you decide what it means to you :-).

In a broken whisper, you like wings
take me to places I’ve known
Over and under and well past beyond
to the memories I no longer own

Moon hardly visible, in a night so still
appears now from echoes of smoke
Tied all together with silver string
hangs in the darkness alone.

Now on my own, I thrive on neglect
A bittersweet taste on my lips
Slip’n past reason, locked in uneven
circles that will never end.

The sky was the color of rain