How did a Hawaiian, Japanese, Jewish hula dancer hook up with a Colorado boy who used to play blue-grass music… and come to be a prolific, creative songwriting team? 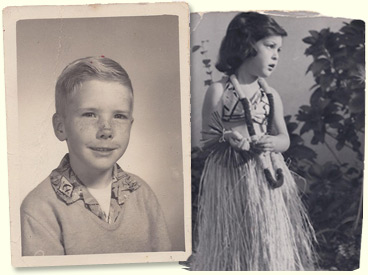 After many years living in L.A., the hula dancer moved back to her family home on the island of Kauai in the 80’s to help her family. The Colorado boy who picked up a guitar when he was 13 and has played ever since, found Kauai on an impromptu vacation, fell in love with the island and relocated there in the 80’s. She, a former x-ray tech and an always-artist who dabbles in paint, glass and ceramics. He, a talented and successful entrepreneur with no fear of new adventures and an always-artist with a guitar.

It was a chance meeting – okay, it was a pick-up – Lynn was a little drunk on champagne, out cruising with a girlfriend and asked the guitar player to dance. The rest reads like your basic happily-ever-after love story – some unusual twists and turns – but your basic love story. On their first date, Thayne plays guitar for Lynn and sings her some of his songs – she is immediately under the ether.

When they met, Thayne was in the middle of liquidating a tour-boat business that he owned and operated. One of the couple’s early dates was a boat trip. Thayne invited Lynn to accompany the tour group who had booked his boat for an exclusive tour – turns out they were all members of the Audubon Society who hired Thayne and his boat to chase ocean birds. Well, it was a most interesting journey. The bird-watchers would yell “Black-footed boobie eleven o’clock!” Thayne would crank the wheel and whip the boat around to chase after them. Lynn was totally enamored, how could she resist someone who would chase birds from a boat out in the middle of the ocean?

At the time they met, Lynn was working to develop a family aquaculture business growing clams. The clam farm was off-road and needed caretakers to live on the remote property. As it happens, Thayne owned a tent and 4-wheel drive jeep. A portable home and wheels! It was a match made in heaven!

They moved into the tent on the beach on Kauai, became the first licensed shellfish growers in the state of Hawaii and worked the family clam farm for a few years – living with no electricity or running water. Their evening entertainment was making music. Hours and hours of little ditties are created on acoustic guitar by Thayne and recorded on a boom box which Lynn skillfully engineers. Thayne introduces Lynn to the magic of songwriting there under a teacup moon on a sandy Kauai beach. Yes, there is a very early song they wrote called “TeaCup Moon” which will be recorded in the future!

Lynn enjoys the process of improvising melodies along with Thayne’s music and he soon realizes that she can sing, although she was hard-pressed to believe it. Well, years pass, they live a few lives with music always in the background, but always an important part of their lives as a couple.

On December 9th, 1989, Lynn and Thayne marry on the beach at Poipu, Kauai, Hawaii. 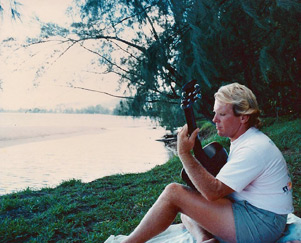 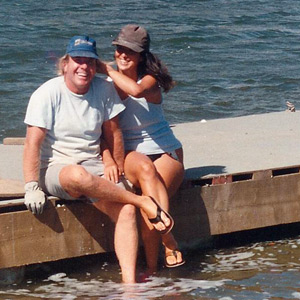 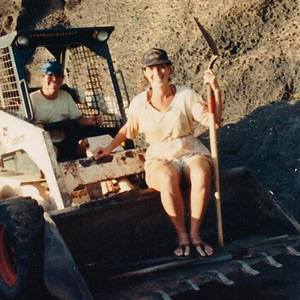 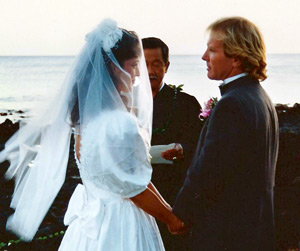