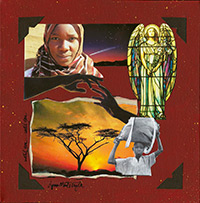 Valentine’s night a few years ago, we had just come home from performing at a little lounge on Kauai. I flipped on the T.V. To find the Oprah Valentine’s Day Special. Guests were telling their love stories. “Veronica” is directly based on one of them. Continue »

I walked alone, until you, until you
Just one look and I knew, and I knew
Inside my heart you would stay,
Captivated that special day.

Caught in a moment, gone in just the same.
Held for a lifetime in a picture frame.
There we were, you and me
and dreams of how someday it might be.

Was it really by a twist of fate?
Or is more at work when love’s at stake?
You are my light, my fortunes paid,
My heart’s desire fufilled today.


The Story of “Veronica” (continued)…

A young man had survived a horrific trek across the deserts of Sudan, ending up at a refuge camp where he meets a beautiful girl. He was able to find someone with a camera to take a picture of them. The young man carried that picture with him in his bible for years after he was relocated to the United States. Living his new life, and in medical school, he always wondered if he would ever see that lovely girl again, having no idea of what became of her after he left the refuge camp.

Years pass and he goes on a holiday to Canada with some friends where they visit a beautiful cathedral. The young man walked into the church, and there she was, sitting in one of the pews – Veronica – the girl in his photograph. They are now married.

The lyrics to “Veronica” were written the same evening I saw the Oprah Valentine’s show and were completed within an hour. Thayne developed the music from the lyrics. It is our hope that we can someday deliver a copy of “Watercolor Dreams” and their song, “Veronica” to this inspiring couple. If this song takes flight, we would like it’s success to help the plight of the other lost boys and Sudanese who have suffered the atrocities of genocide.